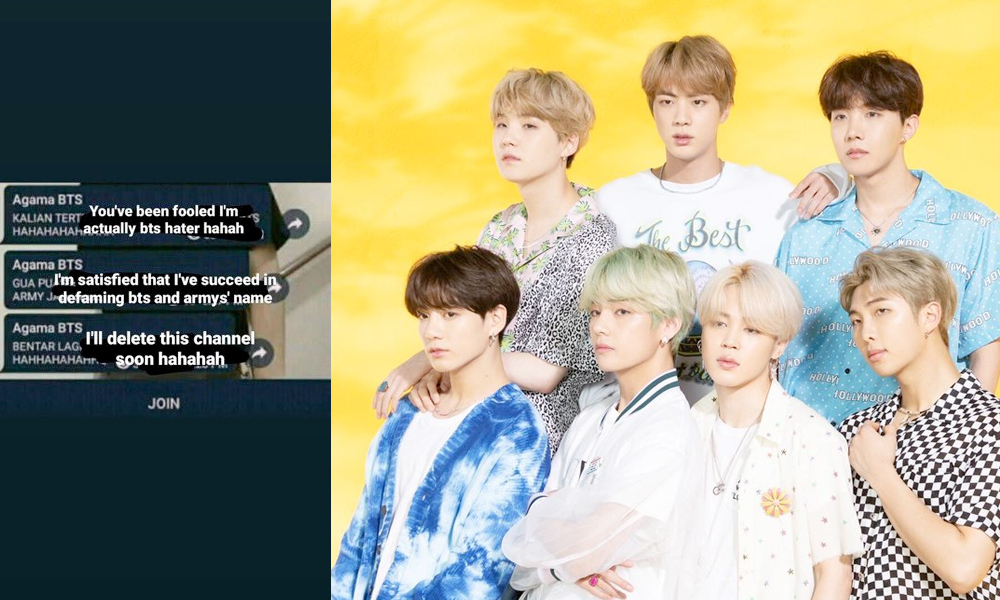 after days of searches, here is finally the thread explaining the telegram situation, exposing the admins SNS but also proposing solutions to ARMY. first, let’s begin with an explanation for those who don’t know anything about what’s happening.

few days ago, a group of indonesian and malaysian locals have created a telegram channel they named ‘ BTS worship/ worshiping BTS’ comparing BTS to allah and acting as if they were ARMY.

the news and the conversation inside the telegram was leaked to other locals, who started believing that it was really ARMY who created the channel and are worshiping the boys.

before you continue reading, you should know that indonesia is composed of 87.18% of muslims and malaysia 61.3% of muslims, so you will understand that when locals got aware of the situation they started attacking BTS and ARMY sending them d/eath threats,

as they thought it was really ARMY who made the telegram, plus this was disrespecting allah and islam. The news got bigger and some indonesian and malaysian influencers started making videos about it, ofc insulting BTS and ARMY.

now that the main explanations were made. we will finally start this thread by first cleaning malaysian and indonesian ARMY name. when we first contacted the admin of the channel through SNS,

we warned him and said we will contact the police about the situation as law in indonesia and malaysia punish ‘whoever defame a religion, persuade someone to be non-believer, disturbing a religion ritual and slander a religion’.

he got scared and posted an apology saying he will delete the channel which he did. unfortunately, few days later when he saw that ARMY did not contact any authorities he felt like we were lying, and decided to create other channels.

you must know that 90% of the people that were in these channels were minors (including the admin) which doesn’t allow us to post their pictures on media and this is why we will not.

when this situation took bigger proportions, and the admin saw that no one believed he was an army, he revealed the truth saying he was a ‘hater’ and that we was satisfied he defamed ‘bts and army’.

now about the solutions we came up with. Together we can contact BigHit because these people have defamed BTS and ARMY image and sent them death threats.

We will also contact the local authorities for defamation and slander of islam. And finally the cyber crime team under the ‘law of protection indonesian children’ (army that received d/eath threats were majoritarily minors and for spreading